A Much Kneeded Stairway Makeover (in which "Mister Cookie" toots her horn!)

Every summer season has its projects, some of which involve necessary repairs or refits, some are cosmetic projects, and some are to enhance or better the boating experience. And, I guess, some of these projects happen when one of us has time alone at the marina because the other is away for a spell. When I was in Montreal doing a show for five weeks during the summer of 2010, I returned to find Adrian had installed and wired a lovely new refrigeration system. In 2017 I was in Wolfville for a week and he had created the first drawer on a pull-out system he had devised for the pantry cupboards under the bench.

This past June, Adrian was down in Toronto a fair bit, doing some recordings and also getting some help for his knees. After Monovisc injections were tried and failed, he was undergoing a relatively new procedure, called PRP: Platelet Replacement Procedure.

A boat is a tough place for bad knees. The 1979 Grand Banks 36 that we have is, for the most part, superb in its design considerations. However, there is one notable flaw: the stairs between the Stateroom/Master Cabin and the Salon/Saloon.  These stairs have always felt awkward, even on our once athletic knees, and we figure the poor design of them is, in part, to blame for the poor state of Adrian's pegs.

This staircase is fitted with only two steps spanning a total drop of 35 ½ inches.

While Adrian was away, I figured it was time to start doing something about the steps, so that any improvement on his knees wouldn’t be canceled out after his return to the boat. But I didn't want to attempt anything that was irreversible, in case it didn't work; and I certainly didn't want to affect the original boat architecture. I needed to find a way to add to, and work with, what was already there.

The rise of the original steps is as follows, as if it were viewed from the side:

A standard rise for stairs on land is just under 8 inches, and obviously, the rise should be consistent, or else, your body can get a shock descending and a trippy surprise ascending….

The constraints of this space don't allow for much engineering leeway. The edge of the trim on the doorway to the head is only 36/8 inches from the bottom box-step, as you can see in the above diagram. The best thing about the existing stairway is that there is a sturdy handhold on the wall.

I  made a few drawings, scratched my tiny head a lot, tossed around several different ideas, and ultimately, after trying to weigh its potential flaws, decided, with slight modifications, to attempt this one: 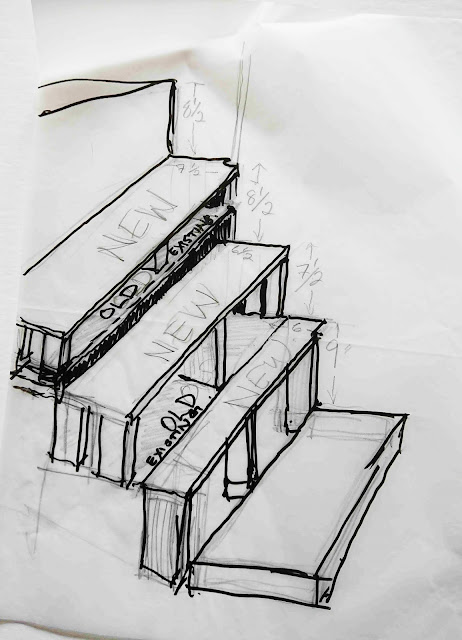 It would be by no means perfect, but each rise would be considerably less in height, and, overall, consistent-ish.  Whereas before, one step was 13½” , now there would be no big jump between steps, the greatest being 9”. In order to achieve nothing higher than 9", I would have to create a sort of a pancake step on the floor, low enough to allow the head door to swing open.

The drawback to making three steps into five is that the tread, or run, of the steps would be affected. That's why the best feature of the stairway is the sturdy handhold! Going up will be no issue, but in descending, big feet will have to turn to the side on the narrowest step--and, voila, thanks GB, the handhold is there to assist the turn.
Just atop a small cliff above the marina, friends Gord and Chris live, during the summer months. Gord has a shed with an impressive array of tools, and any we don't have he generously lets us use. In this case, Gord offered me use of his table saw, showed me how to set it up and use it (with ear protection) and then provided me with a pick of his scrap lumber! .

I was able to cut my variety of risers and treads from some dry 2x10s (spruce, I think) and then created trim from some pine pieces I scrounged from the boatyard's scrap pile.

The lumber, 2X10 softwood, needed a fair bit of sanding. Not an elegant choice, but it was sturdy and available...and FREE. The most important part of this endeavour is that the steps are completely secure--not bendy, nor shifty--and I figured that if the engineering worked but the result looked out of place on the beautiful Grand Banks interior, I could always use the softwood as a basic template from which a future stairway could be made, with something closer to the original Teak.

Below are some photos of my step-by-step process (literally) to make the drawing a reality.

It was a pretty successful project, using and upcycling what was generously offered and at hand, and at no cost, except maybe a couple of splinters.
All in all, Adrian is happy, I is happy, and his knees were saved for other endeavours... 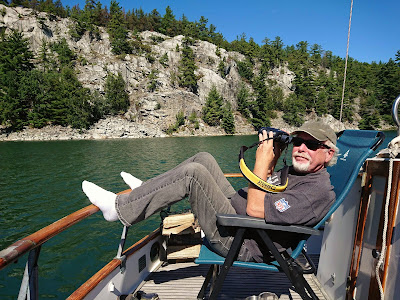 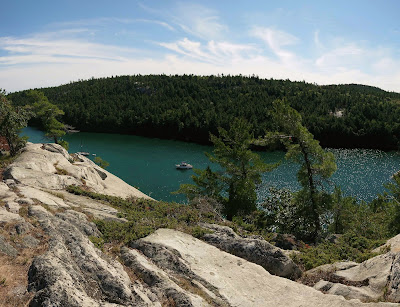