Man, it was hot.  The thermometer read 32° Celsius.  We filled our tanks with fresh water, hoisted the dinghy to its chocks and hauled The Blue Merganser (my inflatable kayak) onto the aft deck. Left our slip at Wright’s Marina at 11:15 am. I asked Pauline to look after my garden.  She wouldn’t accept a tip, even though as Marina Manager she has plenty of other things to do, especially in the height of summer what with all of the Loopers coming through.

On our way down river, we passed NHL Hall of Famer Gary Sabourin, somehow unaffected by the heat, stoking his fire barrel on the shore side of his screen-porch. He waved and shouted to us through the smoke, in his cheery crackling voice, to “Have a Good Time!" Once out of the inlet, with the engines throttled up, the movement of the water-cooled air provided a thrilling release. 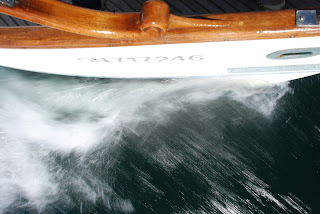 While Adrian piloted the channel past the McNab Rocks I finished stowing the fenders, tied our dock lines in gasket coils and hung them on the bridge rail, and then flaked two floating lines in preparation to tie them ashore.

There was a bit of a breeze when we arrived at our anchorage.  It took us three tries to set the anchor, not because of the strength of the breeze, but rather due to its direction.  We had to adjust our position, which meant there was smooth rock bottom beneath us and the anchor couldn’t find a place to dig in.  We’d opted for the chain rode, because we'd heard (erroneously) that there was wind coming and knew that we’d have a short leash in this particular cove. It made for tiring work in the heat, having to haul the anchor up twice—and because a rock shoal was in the lee of us, there was added pressure to work quickly. Our windlass doesn’t have any teeth or notches to grab the chain/cable links, so you have to use strong legs and all of your muscles in teamwork with the winch.

Just as we’d begun the anchoring process, and the 35 pound CQR was lowered for the first attempt, a Zodiac with four passengers cruised into the cove. As they approached, I gestured that they might want to steer clear—kind of a two-handed-please-slide-away gesture. They cheerily waved, and kept coming. Surprisingly, they circled in and around us and toured the tiny cove as we reversed and returned and weighed anchor and hauled it up and turned and dropped and reversed and returned and weighed anchor and hauled it up…. On the third attempt, after I'd dropped the anchor, Adrian once again put the engines in reverse, and the hook caught beautifully. I put my foot on the chain and leaned my weight on it to feel it set in, and when taut, it fairly sprung me up in the air.  I cleated the chain, and went astern to the kayak, and paddled the first of our two stern lines to shore, wrapping the line on the windward side around a sturdy white pine, with a piece of thick hose to protect the bark.  The rest was easy, as the boat was no longer threatened in the wind, and Adrian was comfortable shutting down the engines.

There is a piton of sorts with a steel ring up on the short cliff off our port stern, and I clipped the second line to it and Adrian hauled the line in tight.  But man, it was hot. I was exhausted with it at this point, and everything ached. I returned to get a cold beer, but as soon as I brought Merganser back to the boat and stepped on board, I changed my mind about the beer.  Already drunk with the sweltering work, I swung a leg up and tipped myself over the boat’s teak rail and plunged down the three feet of freeboard, fully clothed, into the gorgeous water.  That kind of blissful reward makes physical effort very pleasurable.

And then…icy cold beer from a special compartment in the bridge freezer.

With one stroke the kayak was propelled across to the low smooth rock on the west side of the cove, and after pulling it out of the water I released the air from it. The inflation of its inner chamber needed to be adjusted due to the fluctuation in temperature, and the rock beside the fire-pit provided a flat platform to tend to the job. Re-inflating it was my last task, and afterwards I stretched out on the granite and felt the heat penetrate the muscles of my back, then peeled off clothing and slipped into the water again.

Now it’s 8:30pm and the sun is 5 degrees or so above the treetops. The generator is running, with a few dips now and again—likely due to the freezer kicking in, or the fridge. It always feels so good when the systems work as they are meant to. I’d rewired the solar panel earlier this week for maneuverability reasons, but as a bonus, it’s generating more amps then it did before. We’d shut the engines off at 12:45 and the state of charge had only dropped to 94% by 8 pm, despite the fridge and freezer’s draw.

There is a flock of seagulls growing over the south west side of the island. Flock doesn’t seem right, the way their flight crazes madly around. It makes me think of one of those Renaissance dances we studied at the National Theatre School of Canada, but where all of the dancers are, to various degrees, insane. A madhouse Galliard. In this case, a Gulliard.  I thought I saw a pigeon among them.
To my mind, this spot is one of the best anchorages we've ever had. We have our own giant swimming pool, each direction is a landscape by AY Jackson, Tom Thomson, or Varley. Every aspect provides a tingling sense that clairvoyance is possible. And we cannot see any other boats. Climb around the island that surrounds us, you can see among the other hundred or so islands, the distant buoys of the small craft channel, see cruisers traveling up or down it, but they can’t see you….

Instead of facing the sunset, we have turned our chairs around to watch the effect of it on the rock cliff. It is turning pink, orange, rose. The wind calmed completely and now the water is still, except for the splash of a small fish, or the water-bugs, zipping around like bumper-cars.

Our swim platform is a mere 20 feet from the shore, enough to keep a bear from stepping easily aboard, but close enough for us to admire the wild rose, the lady slipper, the wild iris. The sun just dove under.  Everything is soft.

It is dark. I am sitting on the bridge still--sitting still, still sitting--perched atop the back of one of the benches.  I can hear the thunking and exhalations and the groaning of muscles as Adrian, down in the stateroom, puts the bed together.

The stars are a full-on slap in the head. I find myself repeating, “This is stupidly gorgeous. It’s ridiculous, how gorgeous this is.”